Poem of the week: Schubertiad by Fiona Sampson

Details of the composer's life are weaved together with themes from his work and echoes of his music in Fiona Sampson's deft sequence, Schubertiad 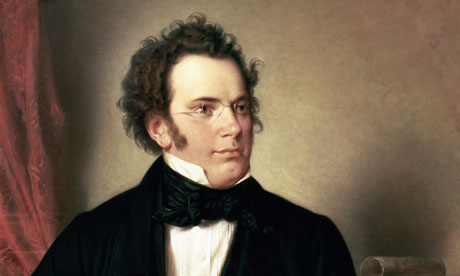 This week's poem, the four-part sequence, "Schubertiad", by Fiona Sampson, seems, at first glance, a kind of translation – of music into text. As the epigraph tells us, it is written "After the String Quintet in C, D956" and, if you know the quintet, you might hear an echo, in the first poem, of the mysterious opening of the Allegro, or recall the Adagio's pizzicato passages in those very short lines at the end of the second. But the translation analogy doesn't take us far. What these small, song-like poems seem to do is create a parallel world. They are impressionistic, and, in their swift movement and glancing, sun-and-water imagery, they realise the essential, mercurial quality of Schubert's music.

It's a quality demonstrated in the way the composer can take a single song through such varying tonalities it seems almost to encompass the emotional range of an opera. Sampson is a poet who shares something of this legerdemain. "Schubertiad" also weaves in a biographical thread. In the Quintet, an unusual second cello adds gravitas. In the sequence, darker harmonies arise from the conflict of the composer's time-poor life with the power of his genius to re-make time on its own terms.

The Quintet was completed during Schubert's final illness in the autumn of 1828. His deathbed forms the closing image of the poem. "Schubertiad" begins, though, by tracing an uncertain miracle closer to birth. "One moment before it starts - / one breath." This is the pause before the music happens – before the composer writes down the first notes, before the ensemble, poised to breathe as one, begins to play. But the opening stanzas are not tied down to a particular narrative, and the reader might equally see a love affair unfolding, or any emotional event that tunes anticipation to concert pitch.

The risk of being out of time, in both senses, fades in the second poem, where there is a gorgeous, sensuous present tense. The Schubertiaden were organised by Schubert's devoted friends to promote his work and fund its publication. They could be sumptuous affairs: after the performances (entirely of Schubert's compositions) there would be food, drink and dancing. At the party imagined by the poet, there is a Turkish flavour (lokum is the sweet we call Turkish Delight) reflecting the Austrian fascination with Turkish culture after serious threat from the Ottoman empire had receded. The sense of abundance is confirmed by the shift from two to three-lined stanza, though the writing is still spare and delicate, with touches of assonance and one strong internal rhyme ("throws/rose").

The singing girl seems casual and fluent, like the river (a recurrent motif) and like Schubert himself. It's said he once composed eight songs in a day. This ease of composition perhaps connects to the allegorical figure of the wanderer, often found in German romantic poetry and in Schubert's music. "Das Wandern" (wandering) is a delightful freedom celebrated in the earlier part of Die Schöne Müllerin. Conversely, "Der Wanderer", one of Schubert's greatest songs, sets a poem by Georg Philipp Schmidt in which the exile faces up to permanent estrangement: "There, where you are not, there is your happiness." A similarly sombre mood shadows the third poem, the most fully rhymed of the sequence, with its opening apostrophe, "Wanderer". It hints at the aberration which exiled Schubert from his own life, through venereal disease, and "kiss" finds the darkest rhyme imaginable: "Dis".

In the last section, the patterns described are architectural rather than musical. The river of melody, blocked in the previous poem, strains impotently to flow again. We are brought very close to Schubert when the elaborate metaphor of the "spring ice/ yawing on its tethers" gives way to the colloquial intimacy of the exclamation, "You poor soul." The man is "quite bare" and painfully visible in those quickly sketched details: the spectacles, the "soiled bed". There is no sentimental suggestion that, because he has written transcendental music, his death doesn't matter.

("Schubertiad" is from Fiona Sampson's fine recent collection Rough Music and is reprinted by kind permission of the author and Carcanet.)