WASHINGTON — President Obama met on Thursday with the Dalai Lama, the exiled Tibetan spiritual leader, for a low-profile meeting at the White House that nonetheless raised the hackles of China. 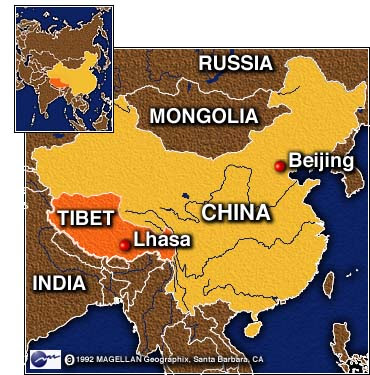 After the meeting with Mr. Obama, the Dalai Lama told reporters that the two men talked

about democracy, freedom and human values. In a statement the White House said that Mr. Obama had expressed support for the preservation of Tibet’s “unique religious, cultural and linguistic identity and the protection of human rights for Tibetans in the People’s Republic of China.”

The meeting — which the White House initially put off last year so as not to raise tensions with China before Mr. Obama’s trip to Beijing in November — is the latest twist in the more muscular position that the Obama administration has been adopting with China, after a year in which China has struck a firm stance with the United States on a number of issues.

Last month, the administration announced a $6 billion arms sales package to Taiwan, a move that infuriated Beijing because it considers Taiwan a renegade province. The meeting Thursday between Mr. Obama and Tenzin Gyatso, the 14th Dalai Lama, was not going over well with Chinese officials either. China regards the Dalai Lama as an advocate of Tibetan independence.

Chinese officials demanded—in vain—that the United States reverse its “wrong decision” for Mr. Obama to meet with the Dalai Lama. And while the White House has taken pains to avoid the appearance that this is a meeting between two heads of state—Thursday’s meeting, for instance, took place in the White House Map Room, and not the Oval Office—the administration also announced that Secretary of State Hillary Rodham Clinton would also meet with the Dalai Lama later at the State Department. “The Dalai Lama is a Nobel Peace Price laureate, internationally revered religious and cultural leader and the secretary will meet him in this capacity as recent Secretaries of State have done,” said a State Department spokesman, Mark Toner.

White House officials had said they would keep the visit low-key, releasing a photo after the meeting between the Dalai Lama and Mr. Obama. But there was no joint public appearance.

American presidents, in deference to China, usually do not meet publicly with the Tibetan spiritual leader. President George W. Bush broke with that tradition back in 2007, though, when Mr. Bush attended a ceremony in the Capitol Rotunda in which Congress bestowed upon the Dalai Lama its highest civilian honor, the Congressional Gold Medal. 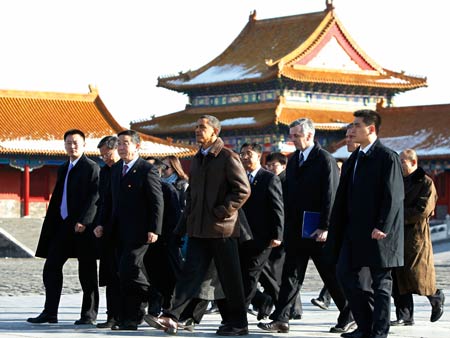 The Dalai Lama has lived in exile in India since the Chinese military crushed an uprising in his homeland in 1959, and is revered as the spiritual leader of Tibetan Buddhists. He has been pressing to return to China to advocate for greater cultural and religious freedoms for his followers.

China experts said that Chinese President Hu Jintao might retaliate for Mr. Obama’s meeting with the Dalai Lama by canceling his planned visit to Washington in April.