Michelle Obama began an official campaign against childhood obesity yesterday by discussing a warning from the First Family’s doctor that her own daughters were becoming overweight. “In my eyes I thought my children were perfect,” Mrs Obama said at an event organised by US health officials to tackle the epidemic of childhood obesity. “I didn’t see the changes.”

Mrs Obama appeared at the campaign launch outside Washington with Regina Benjamin, the US Surgeon General, who also invoked her own struggles with weight gain to enforce their message. The First Lady, who created a White House vegetable garden with local schoolchildren to encourage healthier eating, was introduced by Ms Benjamin as “everyone’s favourite vegetable gardener”.

Mrs Obama, whose star power is being used to try to fight a problem in a country where two thirds of adults and one in three children are overweight or obese, said that the family paediatrician “cautioned me that I had to look at my children’s BMI”, or body mass index. “He was concerned that something was getting off balance.” 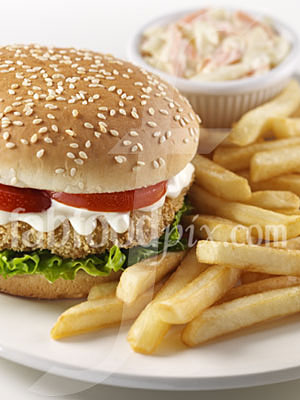 It is not the first time that the President and his wife have talked publicly about their children’s weight. In November 2008 Barack Obama described how the habits of their children had to change because Malia, 11, had become “a little chubby”. Mrs Obama said that modest alterations to the lifestyle of Malia and her sister, Sasha, 8, had produced results.

The girls were banned from watching television on weekdays. They were switched to low-fat milk, and had to cut back on burgers. Portion sizes were reduced. Water, instead of sugary drinks, was put in their lunch boxes. Grapes were placed on the breakfast table, and apple slices sent with them to school. Colourful vegetables were served at dinner. “It was very minor stuff but these small changes resulted in some really significant improvements, and I didn’t know it would,” Mrs Obama said. “It was so significant that the next time we visited our paediatrician he was amazed. He looked over the girls’ charts and he said: ‘What on earth are you doing’?”

In his State of the Union address President Obama mentioned his wife’s campaign against childhood obesity. In words that led to a standing ovation for her he said: “I want to acknowledge our First Lady, Michelle Obama, who is creating a national movement to tackle the epidemic of childhood obesity and make our kids healthier.” Mrs Obama urged the audience of congressmen and senators to sit back down. “She gets embarrassed,” Mr Obama said.

Kathleen Sebelius, US Health and Human Services Secretary, told yesterday’s launch that the US spends nearly $150 billion (£94 billion) a year fighting obesity — more than it spends on cancer and twice as much as it spent on obesity in 1998. 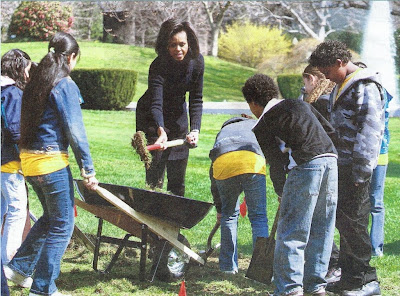 Mrs Sebelius, who added that $650 million of economic stimulus money was being spent on programmes aimed at stopping obesity and smoking, said: “The unhealthier we are the more our healthcare costs will rise and the less competitive we will be globally. We not only have a moral obligation but I would say an economic imperative to make a change.”

Ms Benjamin, whose full figure generated debate on her suitability to be Surgeon General after her appointment last year, released a report listing recommendations for preventing obesity, including eating more fruit and vegetables, adding “high-quality physical education” in schools and bringing more supermarkets to low-income communities”. “The number of Americans, like me, who are struggling with their weight and health conditions related to their weight remains much too high,” Ms Benjamin said.