Beijing’s Air Is Cleaner, but Far From Clean

BEIJING — This city’s network of arterials, five ring roads bisected by nine more freeways, is barely two decades old, but it already is sclerotic. Roughly four million vehicles clog Beijing roads, seven times the number about 15 years ago. On any given day, another 1,500 new vehicles join the crush. HAZY OUTLOOK The highway system of Beijing is often clogged, despite measures to limit the number of vehicles in use and to replace older models with cleaner, more fuel-efficient ones.

So it is no surprise that Beijing has some of the worst air pollution of any big city on earth.

No, the surprise is this: Beijing’s air is actually getting cleaner.

China may have a hard-earned reputation for long-neglected and fearsome environmental problems, from poisoned rivers to chemical-belching smelters. But the nation’s capital, Beijing, is trying hard to clean up its dirty air. 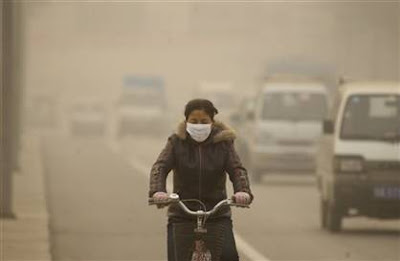 The results show up not only in recent pitch-perfect October days, but in the data that for years have presented a bleak picture of pollution here.

Through September, the government counted 221 days in which the 0-to-500 pollution index — the lower the number, the better — was below 101. It was the greatest number of “blue-sky days,” as the city calls them, since daily measurements were first published in 1998.

At the same time, the city has recorded only 2 days with dangerously high air pollution. That is the lowest number in a decade, and fully 17 days fewer than were logged in the same period in 2000.

Outside experts caution that the city’s measurements are not just imprecise — they do not measure the tiniest particulates that are most damaging to lungs, for instance — but potentially misleading.

The government index is a 24-hour average of readings from monitors citywide. In contrast, a single monitor operated by the United States Embassy in downtown Beijing, where traffic is heavy, consistently reports less healthy air conditions than the official index.

And Beijing’s air remains far from pristine by any measure. The average concentration of particulates in city air during 2008, for example, was six times the ideal standard recommended by the World Health Organization. Indeed, Beijing has yet to meet the W.H.O.’s interim air standards for developing countries — or even the less stringent standards posted by China’s national government.

Yet if the air remains bad, experts say, the trend toward clearer skies is both steady and undeniable.

“For those of us who have been monitoring air pollutants for about 10 years, we see a clear reduction in pollution,” Zhu Tong, a professor and air pollution scientist at Peking University’s College of Environmental Sciences and Engineering, said in an interview.

In the past decade, in fact, authorities have moved against air pollution problems with a tenacity that some environmentalists in developed nations, pitted against industry lobbyists and balky political machinery, can only envy. Consider: since 1999, the city has ratcheted up its new-car emissions standards from nonexistent to the level of Euro IV, the same clean-tailpipe requirements that are now enforced across the European Union nations. The rest of China will move to Euro IV next year.

With the switch to Euro IV, Beijing environmental officials last year ordered a 90 percent reduction in the sulfur content of gasoline and diesel fuel, as well as significant new cuts in polluting compounds like benzene and aromatic hydrocarbons in gasoline.

Nor is that all. More than 4,100 of the 20,000 city buses run on clean-burning compressed or liquefied natural gas — the largest such fleet in the world. The Beijing subway system, currently about 125 miles of tunnels and overhead tracks, is undergoing a breakneck expansion that will nearly triple its length in the next five years.

Nor is that all, either. Before last year’s Olympics, the government imposed a regimen based on even and odd license-plate numbers that effectively banned half of all private automobiles from the road on weekdays. Officials — and the public — liked it so much that a modified version, banning one in five cars, is now a permanent rule.

The city also bans heavy trucks from entering the city during the day; after dark, the 18-wheelers can be seen lining up on suburban freeways, waiting for permission to enter. The oldest, dirtiest automobiles — called “yellow-label” cars, after the sticker glued to their windshields — are banned from the center city altogether.

And in July, 11 national government ministries took a leaf from the Obama administration’s Cash for Clunkers program and began offering rebates of $440 to $880 to people who trade in old high-pollution cars and trucks for new ones. Officials estimate that the program will sweep about 2.7 million dirty autos from the roads nationwide.

Impressive as all that is, it may not be enough. While Beijing’s air is cleaner now than in the recent past, the improvements have been largely, though not totally, offset by a sevenfold increase in the number of vehicles since 1993.

Many of the easy cleanup measures, like improving fuel quality and banning the dirtiest vehicles, have already been made. Future improvements will be harder to attain — and yet the flood of cars onto the streets is only growing.

The government insists that it is winning the race. Because older autos emit as much as 30 times the pollution of new ones, officials say, scrapping a relatively few clunkers makes room for many new replacements. Moreover, improvements in gasoline and diesel fuel quality have lowered pollution from all vehicles, including the older ones. 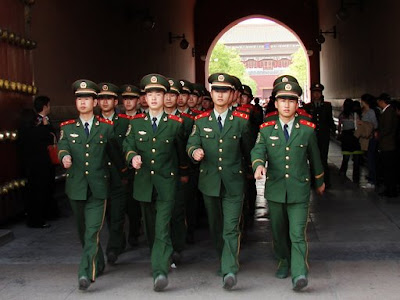 But the city’s cleanup drive is not stopping at its highways.

In the past five years, Beijing has converted 60,000 boilers and commercial heaters to run on clean natural gas instead of coal. The city’s four coal-fired power plants — all of them major polluters — have installed state-of-the-art pollution scrubbers.

Nearly 2,900 gas stations and petroleum storage tanks have been equipped with recycling controls. Hundreds of heavily polluting factories have been moved from central Beijing, including a coking coal plant and a steel mill that is scheduled to depart by the end of 2010.

The mill is a prime example of environmental action, China-style. A unit of the Shougang Group, China’s fourth largest steelmaker, it has been one of Beijing’s biggest employers. When its 140-mile move to neighboring Hebei Province is completed next year, 65,000 Beijing workers will lose their jobs. 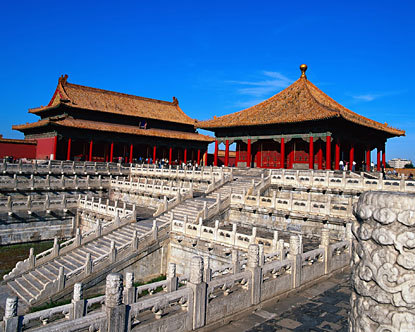 On the other hand, thousands more are getting a better life. Consider Wang Shuqin, a 64-year-old resident of one of Beijing’s century-old hutongs, or alleys, who recently got a new electric space heater for her two-bedroom apartment.

Like most all hutong denizens, Mrs. Wang and her husband, Liu Xingye, have weathered decades of Beijing winters by feeding round bricks of coal into a squat pot-bellied stove. Every day they emptied the stove’s ashes, turning their bedroom floor black. Every night they worried about carbon-monoxide poisoning.

Every year, they burned 1,200 one-kilogram coal bricks — one and one-third tons of coal — to stay warm. Until now: this month, Beijing’s city government gave the couple a two-thirds discount on the electric heater, and a laughably low nighttime rate for electric power, 3 cents a kilowatt-hour.

Since 2004, Beijing has replaced 94,000 pot-bellied coal stoves with efficient electric heaters, eliminating the filth that came from chimneys burning roughly 100,000 tons of coal a year.

Because of that and other changes, Beijing’s sulfur emissions have been cut almost in half compared with 2000, and industrial dust has decreased by two-thirds. “It’s cleaner. It’s much safer,” Mrs. Wang said, flashing a thumbs up. “Now we no longer worry about getting poisoned.”

Increasingly, neither does the rest of Beijing.